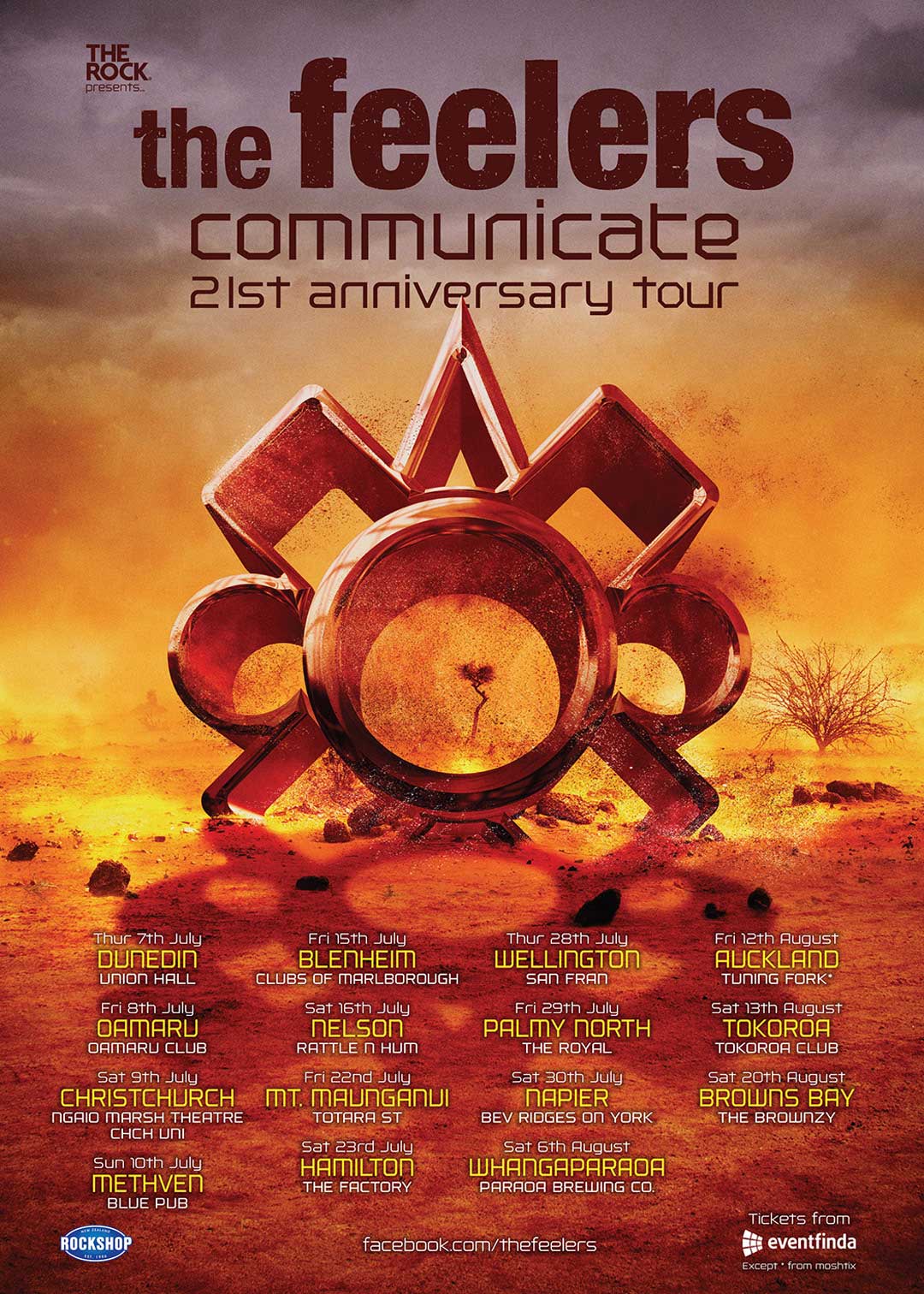 The Feelers announce their COMMUNICATE 21st Anniversary NZ Tour, in celebration of their massive hit album COMMUNICATE. Released in 2001, COMMUNICATE debuted at Number 1 and went on to enormous success as a Triple Platinum selling Number 1 album. Many tracks achieved huge radio rotation and single charting, such as Communicate, As Good As It Gets, Fishing for Lisa, Astronaut and Anniversary.

Recorded at the legendary York St Studios, COMMUNICATE was produced by international renowned producer Gil Norton, whose credits include Foo Fighters, Pixies, Counting Crows and was engineered by Danton Supple, who went on to become Coldplay’s producer.
‍
Lead singer James Reid comments “In a parallel universe when doves cried, we were in the studio crafting the songs of COMMUNICATE alongside Gil Norton. Over the years we have played tracks from the album but NEVER the entire record live. We are deep into rehearsals bringing to life songs we have never played live before, such as Fragile, Forest, Sex Show and The Web - a song I co-wrote with my brother Donald, the outcome was a fantastic record, and we cannot wait to play it in its entirety - see you on the road"
‍
The theme for NZ Music Month 2022 is ‘Level Up’, and the Feelers are inviting up and coming bands to be a support act at one of their gigs by contacting them on Facebook with a preferred location before May 15. The band will select a support act in each tour location to get in behind this great music month initiative.
‍
Hamish Gee says, “As a veteran of the NZ Music scene I love this Level Up narrative and our collective desire is to keep contributing to the NZ Aotearoa music scene, what better way than inviting a young band to come support us, so get to it guys!” We will perform the Communicate album in its entirety and after a brief break finish off the evening playing all the hits you know and love.”
‍
In addition to the anniversary tour, The Feelers will re-release an all-new Re-Imagined version of their classic single Fishing For Lisa. The Feelers are one of the most successful New Zealand bands, having sold more albums than any other NZ band signed to Warner Music NZ throughout the companies 48 years in business. Some of the many accolades they have claimed over the years include five Aotearoa NZ Music Awards and three APRA most played song of the year awards.
‍
In recent years, The Feelers have been perennial favourites at Homegrown Festival, have sold out tours with Stellar and Elemeno P, plus headlined Marlborough Food & Wine Festival, Hokitika Wild Food Fest, First We Eat Fest, and more.
‍
Tickets go on sale today, Thursday 28th April via Eventfinda and can be purchased here